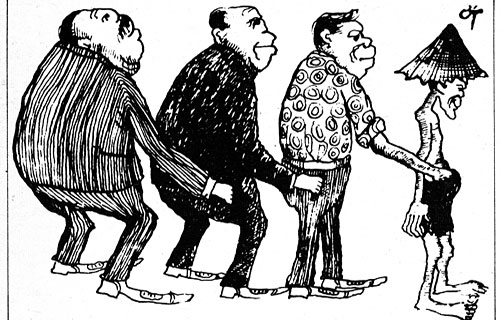 So good to be a...lushtak

Lushtaku family might not have a tradition in business, but this is going pretty well for them. Sami Lushtaku, along with his son and his nephew know how to do business, especially when it comes to winning tenders. Naturally, also how to win from skenderaj municipality also.

The Mayor of Skenderaj Municipality, Sami Lushtaku has had no influence whatsoever in awarding his nephew’s company a municipal tender worth 100 thousand euros. So at least says Milazim Lushtaku, Mayor’s nephew himself. Ever since registering his insurance company “Security Code” in 2008, he has continually won public tenders, and consequently his company now is one of those business with a turnover amounting to millions of euros.

The company “Security Code”, property of the nephew of the ex-commander of Kosovo Liberation Army, who now is mayor of Skenderaj has won a total of eleven contracts with public institutions.

Young Lushtaku, a businessman, says that the close family relation with the mayor of Skenderaj, who is also famous for being a powerful person in the party of Prime Minister Hashim Thaçi’s did not help him in the success of his business.

However, in the municipality which his uncle heads, in 2010 he had won a three-year tender for the physical security of the high school building in Skenderaj.

No one can influence in the procurement procedures. It is pure luck to hit the cheapest price offered. Only this matters. Esat Tahiri

Milazim Lushtaku’s partner sees this contract only as a matter of luck and perfect procurement process. “No one can influence in the procurement procedures. It is pure luck to hit the cheapest price offered. Only this matters”, says Esat Tahiri

Moreover, he denies that he has influenced also the tender in the municipality of Skenderaj. “No, Sami Lushtaku has had no influence. We were the company with the cheapest offer and this was the only criteria” he adds.

According to him, this luck has followed them also in ten other institutions.

He began with half a million

“Security Code” company, property of Sami Lushtaku’s nephew started business with an annual turnover of half a million euros. It is growing and now it is a multi-million euro company.

According to information obtained from public contracts only for 2011, 11 in total, the income was around 3 million euros.

No one can influence in the procurement procedures. It is pure luck to hit the cheapest price offered. Only this matters.

It is now expecting another multi-million euro contract from the Kosovo Energy Corporation, where Njazi Thaçi, Prime minister’s cousin is head of production. The tender is in the appealing procedure and if the Procurement Reviewing Body decides in favor of “Security Code” regarding the contract with KEK, where this company was announced as winner, then Lushtaku’s company will sign a contract for another five million euros. But, the owners don’t make much of these contracts.

“Our company has applied in more than 70 tenders, and from these we have won these contracts. Proportionally it is not a lot of contracts won”, says Esat Tahiri, the other partner of this company.

The company of Sami Lushtaku’s nephew is not eyeing contracts with the state. “Security Code” has only one contract signed with private businesses till now, and that with “Ford” company, the value of which has not been made public.

Other companies of Lushtaku family

“Security Code” is not the only lucky card hand of Lushtaku family. In the general business game they use several other businesses.

The overall value of public contracts signed with “Security Code” is over 5.4 million euros.

It also has a contract worth half a million euros with Prishtina University where for two years it will be profiting 450,411.36 euros for securing all buildings of this institution.

There are at least four other businesses where members of Lushtaku family are official shareholders. These businesses also have been awarded public tenders.

Institutions with which “Security Code” has contracts:

Ministry of Economy and Finance

Ministry of Labor and Social Welfare

In “Shqiponja” Sami Lushtaku himself is a shareholder with 50% of shares. The main activity of this company is construction.

Sami Lushtaku’s son, Mergim had also worked as personnel manager in this company.

But the latter is also following on his father’s footsteps in business.

In its research “Chambers of family employment”, Preportr had published that Mergim Lushtaku, who is Director of the Department for European Integrations in the Ministry of Public Administration (MAP) owns a company which deals in real estate, the name of which is “Virtyti” with address in Veternik-Prishtinë.

His cousin, Milazim Lushtaku, who now wins public tenders, has another two businesses. He is also owner of “Arlindi”  and “ Zippo Bar”.

The powerful “Tower” of Lushtaku family

Another powerful company of the family of Sami Lushtaku is also “The Tower”. This company was awarded by the Municipality of Skenderaj with tenders worth over 800 thousand euros.

This company has continued to benefit from public money even in other municipalities. In its research Preportr has found that this company was a contractor of Drenas municipality as well, which together with Skenderaj consists of a zone in the headquarters of the Democratic Party of Kosovo.

Furthermore, according to reporting by “Lajm”, the municipality of Drenas has done everything possible in order to award this company with this tender.

The municipality of Drenas, led by Nexhat Demaku of PDK, for around six months had been linked to the tender “Construction of the tower of ‘Shaban Polluzha’”. The first announcement of this tender was done in June 2011, where in the first “round’, “Albi Company” from Suhareka was awarded with a price of 40, 782.05 euros.

In the previous year this company was awarded another tender worth 120 thousand euros by the municipality of Mitrovica, headed by Avni Kastrati, also a man of PDK.

This company in 2010 appears to have had also exploitation license of underground resources of Kosovo, issued by the Commission on Mines and Minerals.