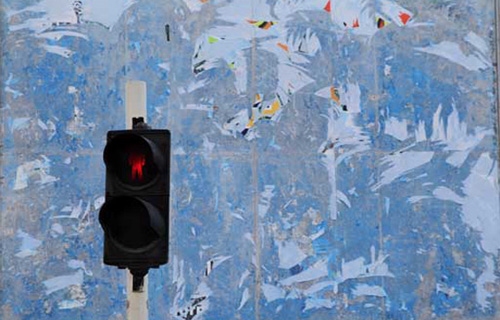 The provision of several bids for one tender does not seem to bother the owner of company “AMM” which has a monopoly in advertising spaces in Prishtina. He says that the inclusion of several companies of one interest group was his strategy for winning the contract. This company, apart from having close relations to all qualified companies for this tender, also has as owner and partner the current Mayor of Prishtina, Isa Mustafa. This company is also an official donor of LDK.

The businessmen Gëzim Salihu and Ahmed Kurtolli appear to be completely accidental owners of advertising in Kosovo’s capital city, which is traditionally led by the Democratic League of Kosovo (LDK).

A research carried out by “Preportr” shows that, after having established themselves in the business through a contract still kept secret, they continue to hold the monopoly through a tender. Surprisingly at the end of the bidding race, all the remaining companies appeared to be connected through partnerships with these two businessmen. They are also partners in other businesses with Isa Mustafa, now leader of LDK and Mayor of Prishtina. Furthermore, the Procurement Law was violated.

According to the research of QKGH, these official donors of this party with their company “AMM” have established a monopoly in the marketing sphere in Prishtina as far back as when the country was led by the Interim Government of Kosovo and UNMIK. The contract which was never public was extended for another 7 years through a tender which was begun to install kiosks in the capital city.

An investigative report by the Regulative Commission of Public Procurement (KRPP), carried out after initial reporting by Preportr shows that this tender, officially titled “Supply with kiosks for Prishtina Municipality”, violated only one procurement rule.

Eyeglasses for the Procurement Procedure

KRPP had found out that the Prishtina Municipality had committed only the mistake of not informing the companies that they were disqualified from the tender race, but surprisingly these losing companies did not file a single complaint.

The research by Preportr uncovers the reason why these companies did not file complaints. The remaining consortiums in the tender race “Supply with kiosks in Prishtina Municipality” belonged to businessmen Ahmet Kurtolli and Gëzim Salihu, owners of the tender winning company, “AMM”

The research by Preportr uncovers the reason why these companies did not file complaints. The remaining consortiums in the tender race “Supply with kiosks in Prishtina Municipality” belonged to businessmen Ahmet Kurtolli and Gëzim Salihu, owners of the tender winning company, “AMM”, or persons related with them.

According to the report of KRPP, the unaccountable companies announced at the end of the tender were “AMM” and consortiums “Auto Avangarde”&”Al Desing”,  and consortium “Proreklam Europlakat” & “Profitech”.

The Business Register shows that Gëzim Salihu is co-owner in company “Auto Avangarde”, together with Raif Salihu and Agron Tofani. The offer of this company for this tender was 286 thousand euros, but it did not appeal after having been disqualified from the tender race. Its mother-company is AMM  and co-owner of AMM is Gëzim Salihu.

Since these two companies did not appeal, the tender was awarded to the third company, “AMM”, owned by Gëzim Salihu and Ahmed Kurtolli, hence extending the monopoly of this company in the advertising market in public spaces of the capital city.

While KRPP did not observe further than the violation that “the disqualified companies were not notified” as regards the tender on “Supply with kiosks in Prishtina Municipality”, Preportr has found that the implicated businessmen in this tender have business relations with the current Mayor of Prishtina, Isa Mustafa.

During the time when tender procedures were under way regarding the tender on Supply with kiosks in Prishtina Municipality, involving companies closely related to each other, Ahmed Kurtoilli was partner in another business with Isa Mustafa, back then only official of LDK and professor at the University of Prishtina. In the past, Mustafa was also Minister of Finance in the Government of Kosovo in Exile, led by the current Deputy Prime minister of Kosovo, Bujar Bukoshi. Kurtolli and Mustafa were partners in Football Club “Prishtina”. 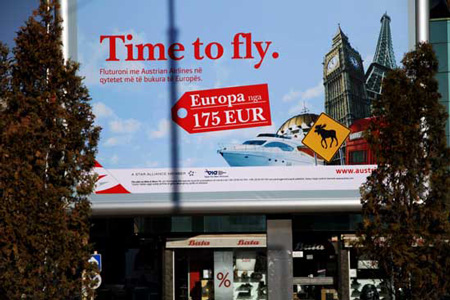 Nevertheless, according to Gezim Salihu, one of the owners of “AMM”, this does not pose any relation to the awarding of this tender. He does not consider there is anything wrong with the fact that all remaining companies in the tender race were closely related to each other.

Furthermore, Salihu says that this was precisely the strategy he used to win this tender, and that this bidding method was not prohibited with the Procurement Law implemented in 2006. But he denies that the extension of this tender was done through political connections, although “AMM” is an official donor of LDK.

“This did not pose any legal violations and this contract has been bound on full legal grounds. To my knowledge, my partner is in no business with Isa Mustafa. If you count Prishtina Football club, that is not a business, but a way of financing the sport. We have had no monopoly in the capital city, but it is another matter that we have managed to grow more than others since we are part of three companies which are very powerful”, said Salihu.

Preportr has waited for more than a month for a response by Prishtina Municipality, currently led by LDK’s leader, Isa Mustafa, but no one from this municipality agreed to talk about this issue.

Why is the contract concealed?

The extension of the contract with “AMM”, which is officially a donor of LDK seems to be the reason why this municipality, traditionally led by LDK, did not agree to speak about this tender.

Preportr has tried for more than six months to acquire access to this contract, and despite the official requests filed in the municipality, it was not granted access. Furthermore, even the municipal assembly opposition was not granted access to this document. Apart from the fact that the income and other details are concealed in this contract, the municipality has also concealed the bidding companies, and Gezim Salihu is co-owner in three of these companies.

The awarding of the contract in this manner has created also a monopoly in the placement of ads in Prishtina Municipality. The Law on Competition, chapter IV, article 14.1 prohibits monopoly and abuse of dominating position.

Although Preportr has tried to acquire a legal interpretation on this matter by the Commission on Competition, this commission did not agree to state anything, since for more than three months it continues to be without a mandate. The selection and interviewing process of the candidates for this commission and its mandate in the Kosovo Assembly is under the responsibility of the Government of Kosovo, but the Prime minister’s office has not provided information as to why the Commission on Competition continues to be without a mandate.